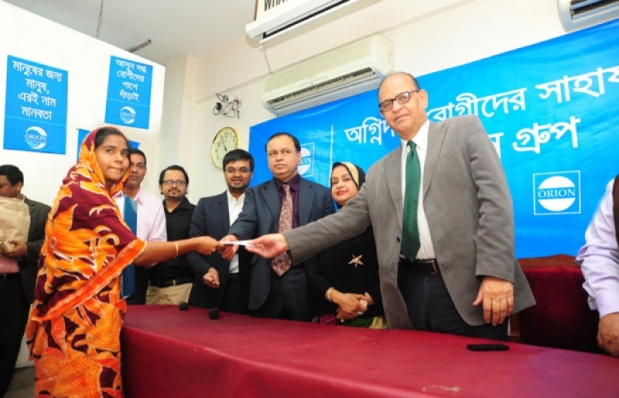 ORION, a Proud Sponsor of

Orion Shares the Joy of E

Orion always believes in sharing and helping the n...

A Flag for Humanity

One of the main objectives of Orion Group is to re...

Orion Pharma Limited & Orion Infusion Limited-the two member company of Orion Group, devoted to manufacturing and marketing of Pharmaceuticals and IV (Intravenous) Fluid have extended again their support to the ailing humanity in Bangladesh. On February 12, 2015 (Thursday) they have donated for the treatment of the burn injured patients at the Burn unit of Dhaka Medical College & Hospital in Dhaka. Honorable Managing Director Mr. Salman Obaidul Karim and Director Mrs. Arzuda Karim, were present from ORION Group in this divine occasion.

On the last couple of days’ political violence, many people including children have been injured from burn injuries. Some of them are so poor to bear their own treatment cost, even after the support from the government. To support those ailing families, Orion Pharma Limited & Orion Infusion Limited has donated some amount to 59 ailing families. As a part of the Corporate Social Responsibilities (CSR), Orion Pharma Limited & Orion Infusion Limited has been helping the societies’ under privileged people for long. Among these supports, these organizations helps the poor blood cancer patients, gives away medical scholarship to the bright but poor medical students and so on. During the fatal tragedy like the incident of Rana Plaza in Savar, they had helped the rescue team to rescue the ill-fated people from the wreckage of the building. Also during the incident of Tajrin fashion, another fire incident that took over 100 lives, Orion Pharma Limited & Orion Infusion Limited had helped the burn injured patients with life-saving drugs, food & saline packs.